I know it's been a long time since I've posted here but I've had a lot of stuff going on and I lost most of my plants as a result.  I'm getting back into the swing of things and Lucky Me is one of the plants that I've found again for my collection.  If I could only grow 10 plants or less, this would be on that list. Lucky Me is one of the most gorgeous violets, in my opinion. I'll be putting a couple leaves down this afternoon to ensure that I don't lose it because it's one of the extremely rare ones. I hope to grow this one for the rest of my days. <3 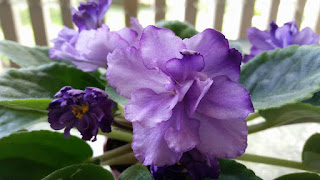 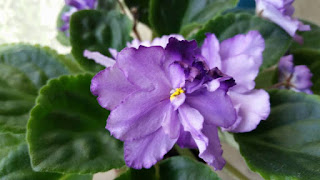 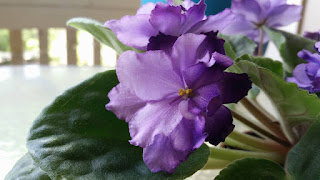 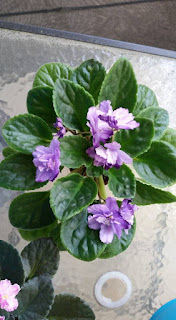 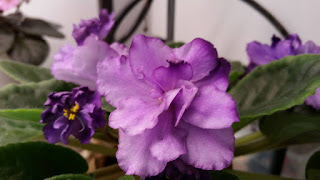 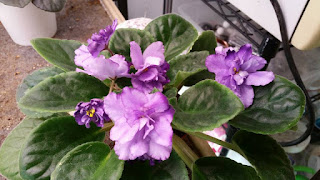 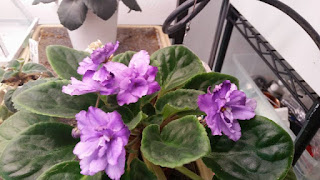 Posted by SallyWright at 6:57 PM 2 comments: 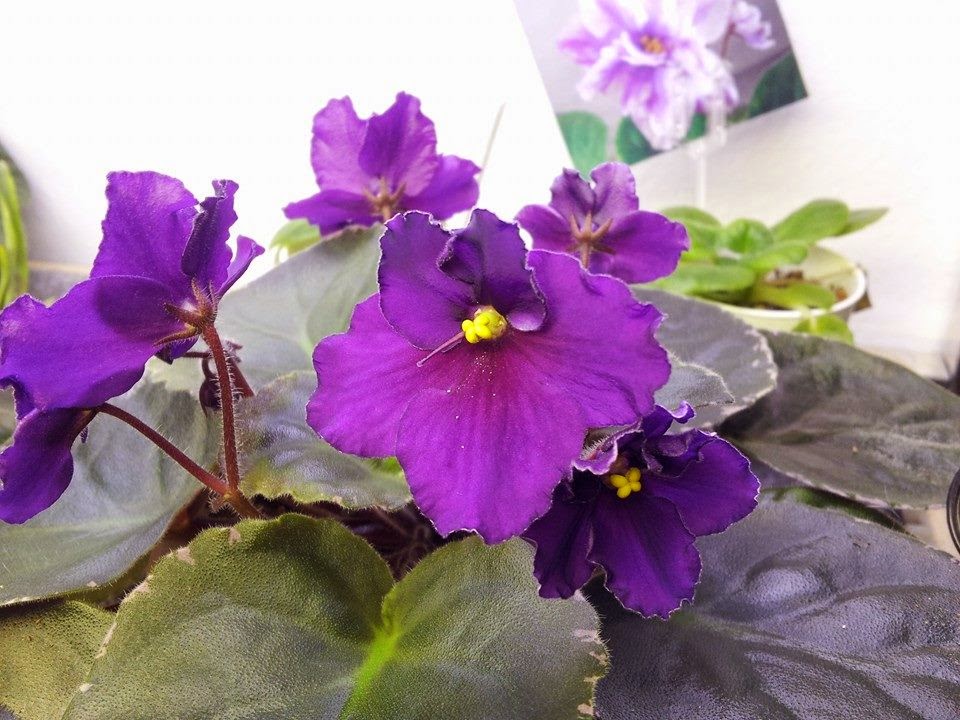 I haven't posted much for a long time because I was having such a difficult time with my violets that it was depressing to come here and see all the successes.  We've moved to a better apartment where our temperatures are better regulated and I recently acquired two light stands, which have made all the difference in my plants!

This is Judie's Satin Doll.  It was hybridized by a local woman and I fell in love with it as soon as I saw it.  I've had this plant for 1 1/2 years and it's a tough one in order for it to have survived the heat and the cold that it was subjected to!  It finally bloomed for me back in June.  One blossom but it was enough to remind me of how beautiful she is.  That blossom faded and then it bloomed again.  This time there are many more blossoms... the pollen on the petals aren't due to any bugs.  This one is ripe for hybridizing if I had something I wanted to cross with it!

Sand Wash Basin is where my heart lives.  I didn’t know that until we got there for the first time two years ago.  I’ve loved horses all my life and had dreamed about Mustangs in the wild since I first read Marguerite Henry’s “Mustang, Wild Spirit of the West”.  After I moved to Denver, CO, I discovered that there were wild Mustangs within driving distance and I was ecstatic!  Our first visit was for my birthday and it was so difficult to leave.  Our next visit a few weeks later made us feel whole again and we knew that this was a place that we had to do everything we could to preserve this place and the horses who lived there.

On the trip this year (2012), we’d already been out for one afternoon and had discovered that one of the current popular spots for the horses was a particular water hole.  We’d never seen horses there in the past but this trip we’d run into Corona, Picasso, Snow Man, and a few other favorites so we went there first thing in the morning on my birthday.  Prince, Cosmo, and Benson were a few of the stallions who had their families at the water hole when we arrived.  We hadn’t been there very long when the horses all looked up.  Another band was on the way!  As they made their way over the hill, I spotted a baby with them!

They went straight to the water and the baby dove straight in.  I was impressed that it went in because it was obviously very young.  It didn’t stay in long before another mare told it that it shouldn’t be out there.  When the foal came out of the water, the other bands really took notice of the baby and it they started over to check it out.  This was when I realized that this baby was brand new because the other horses hadn’t met it yet!  Exciting!!!!  At that point, I started really watching and trying to get photos for documentation.  With some of the new foals it’s difficult to tell what gender they are but this little guy was pretty easy to identify as a little colt! 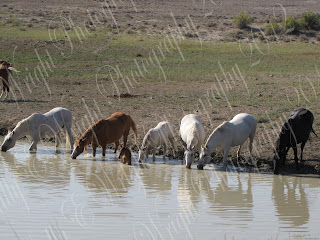 We spent a little over an hour watching the little guy.  After his water hole antics, it was obvious that he was a really brave, although he did stick closer to his mother after that incident.  He spent a lot of time eating and looking around and even slipped a couple naps in during that hour!  We’ve been the first to see a couple of foals at Sand Wash Basin and we did capture another on film on my birthday two years ago, although her family was running for the hills!  I think this was the first time that we’ve had such a leisurely time to spend with a new baby and also at such close range.  Sand Wash Basin has never failed to give us a good experience with the horses and this day was no exception.  It gave me a brand new baby colt.  A colt that we named Dragon! 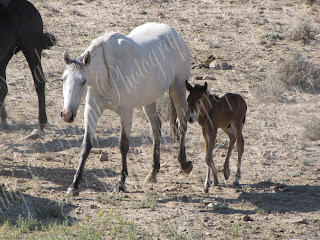 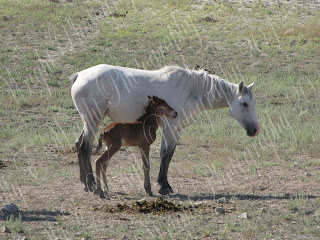 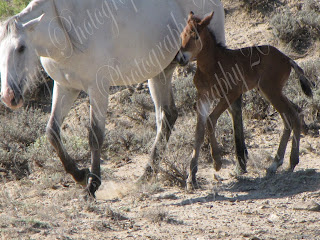 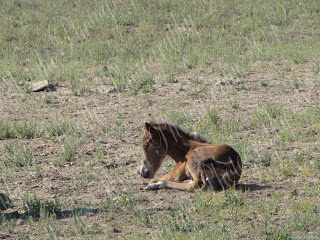 Posted by SallyWright at 12:07 PM No comments:

Sand Wash Basin HMA in Colorado has several palomino colts and stallions.  Skip is a 3 year old stallion who is living his life as a bachelor.  We saw him out of the corner of our eye as we were driving along.  He was running and running, definitely with a purpose in where he was going.  There were no other horses that we could see but he was headed somewhere!  There is no doubt in my mind that these animals are much more intelligent than most people give them credit for. 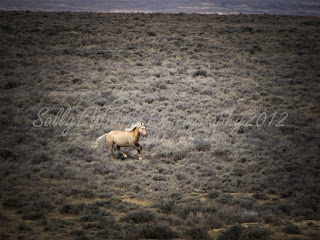 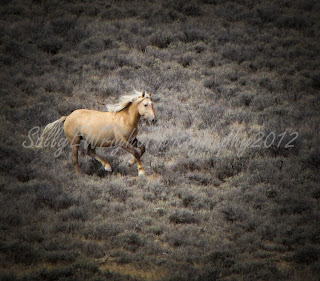 Posted by SallyWright at 6:04 PM No comments: 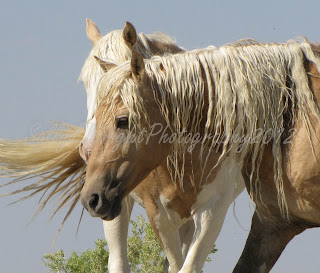 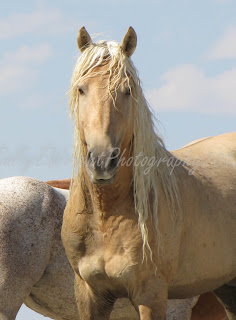 Posted by SallyWright at 2:27 PM No comments:

I have the opportunity to be playing with the Lightroom program.  It's taking a bit of time to figure out since it's different from PhotoShop but I think it's going to be fun to use.  Here's my first photo attempt there.  I cropped this out of a larger photo that I took last summer out at Sand Wash Basin, Colorado.  I also played with the vibrance and saturation. 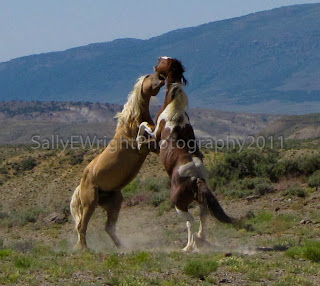 Here it is cropped without anything else being done. 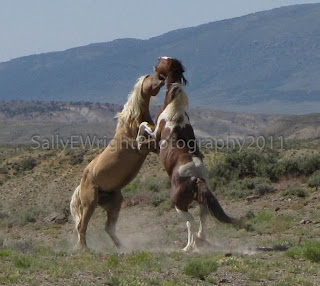 And here's the original photo. 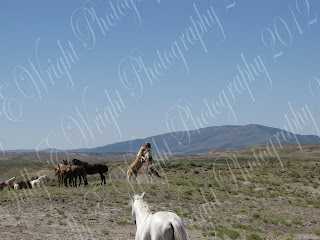 Posted by SallyWright at 11:53 AM No comments:

We went out to Sand Wash Basin in NW Colorado for my birthday last week.  This has become a yearly tradition for us to see Mustangs on my birthday.  This year did not disappoint!  There's a drought but we saw LOTS of horses!

Posted by SallyWright at 8:27 PM No comments:

Looking for something that I've blogged about?